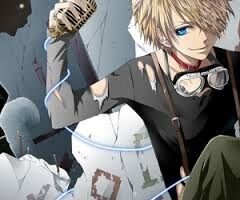 Jethias is approximately 1062 earth years old. He has the appearance of a very grimy, shaggy, and raggedy 12-14 year old Scandinavian boy. He has blonde hair, pale skin and bright blue eyes; his left eye is almost completely sealed with a large scar which he attempts to hide with his shaggy swept hair. Usually dresses in baggy jeans, a dark hoodie and scuffed boots. He carries a rusted, bent knife with an ornately entwined hilt that looks like it should belong in a museum or a junkyard, a utility belt and a pair of welding goggles. The latter is for no apparent reason except that he does not know what their purpose are and thinks they look cool. He is moody, ornery, fiery and impossibly annoying. Constantly tinkering and twisting everything within his grasp, he is the possessor of many traits common to the children of Hesphestes, though he is of purely mortal birth and blood. He has a wide eyed grin and a trickster personality when happy, but can be dark and extremely violent when angry or frustrated. He wanders the streets and tries to pick a fight with anything in his path, this usually never turning out very well in his favor, but  though he is an apparent orphan he seems convinced that his Mam will be worried about him and his sister Aricia will want to play with him when he gets home. He does not fully understand what has happened to him to launch him centuries into the future, and usually lashes out in frustration at anyone that tries to explain.

Jethias was a typical boy in the failing Scandinavian trading village of Birka, in 952 A.D. His father was a poor ship spar carver and his mother wore herself thin every day trying to stretch the meager supply of food to feed Jethias and his little sister Aricia. He is twelve years old and was a popular figure around the ever-shrinking population of the town, known to be a bit mischievous and naughty but always polite and courteous, especially to the elderly. Often he would read to the old folk in town several of his poems and songs and though young it was clear that he was a gifted child in appreciating wisdom and prophesy. He was scarred across his left eye at the age of 10 in a tragic accident involving an adze. At the age of 12 he apprenticed to his father to learn the family trade, though it was a bleak future for the remaining citizens of Birka. He loved working with his hands and his father and the two had a close relationship. His grandmother also lived with the family and though she was paralyzed from the waist down, she helped his mother efficiently stretch the supply of food to the utmost. His grandmother would also entertain the family with wonderful tales of Thor,Njörðr , Baldr and Frigg during the bitter Swedish nights, and so Jethias grew up steadfastly faithful to the Æsir and especially to Odin, the Alfodr.

Thousands of years prior, it was the eve of the Æsir–Vanir War. Odin was preparing to do battle against the Æsir's greatest foe: The Vanir, a group of rivaling gods who were constantly clashing against the Æsir in a struggle for power. Odin was confident in his forces but he knew the power of the Vanir and was not as assured of his victory as in previous battles. The Vanir had grown strong over the years and they now had a new ally, the god Njörðr, father of many powerful gods. He had allied himself to the Vanir with his children and Odin harbored fears that this time the Æsir's might would not prove enough. So Odin decided that he must try to find a weakness in Njörðr, one he could exploit and defeat him with. He disguised himself as an old traveler named Gagnráðr and engaged in a game of wits with the wise old giant Vafþrúðnir. "Gagnráðr" asked Vafþrúðnir where the Van god Njörðr came from, for though he rules over much, Njörðr was not raised among the Æsir. Vafþrúðnir responded that Njörðr was created in Vanaheimr by "wise powers" and explains a prophesy made long ago that when the world ends (Ragnarök), Njörðr "will return to the wise Vanir." Odin took this to mean two things: One, Njörðr was a very influential enemy indeed and two, Odin must never allow Njörðr to be taken from the Vanir, for he feared that Njörðr's wrath against the Æsir would be great if he had to return to them as the prophesy foretold he would. Odin hurriedly left the giant's table and went to make ready his troops for the impending battle the next morning.

Odin chose to attack first and led a great army from Ásaland to attack the people of Vanaland, the heartland of the Vanir. However, the people of Vanaland were well prepared for the invasion; they defended their land so well that victory was up for grabs from both sides, and both sides produced immense damage and ravaged the lands of one another. The two sides eventually tired of the war and both agreed to meet to establish a truce. They did so and exchanged hostages. Vanaland sent to Asaland their best men: Njörðr's mighty and kind son Freyr in exchange for Asaland's Hœnir—who was a large, handsome man and thought of by the people of Vanaland well suited to be a chieftain. Additionally, Asaland sent Mímir—a man of great understanding—in exchange for Kvasir, who was the wisest man of Vanaland. Lastly, as a final token of good will, the Vanir sent Njörðr himself as a hostage to the Æsir. He arrived while Odin was in one of his favorite naps and Odin's generals thought it best not to wake their battle weary commander, so they accepted the famous hostage in the Alfodr's stead with much glee. When he awoke, Odin was furious and demanded that Njörðr be sent back, but it was too late. The gift had been recieved and the die had been cast. Njörðr must never leave Asaland or Odin believed it would signal the end of the world. Njörðr was locked away into the farthest reaches of the deepest, most fortified cells and the Æsir tried to forget about him and the impending prophesy.

Retrieved from "https://theannoyingroleplayers.fandom.com/wiki/Jethias_Alecson?oldid=7147"
Community content is available under CC-BY-SA unless otherwise noted.